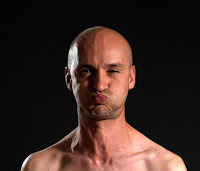 I prefer the term ‘voice sculpture’ to refer to my works for voice, as they follow principles of and are related to conceptual art and sound art practice, and their conception is perhaps less influenced by the history of music composition – although Greek folk music and composers Diamanda Galas, Luciano Berio, Geogres Aperghis and Gyorgy Ligeti have been big influences on me. In these works I use the voice in ways a sculptor may use plastic or metal; stretching, cutting, manipulating and shaping the voice. The processes the voice is subjected to tend to be ‘natural’ in that they are mostly achieved in the body (usually my body) or in the acoustics of a space and its materials, rather than through electronic means. However, I do experiment with electronics, which often inform and enrich my vocal palette.
The practical art work of ‘The Acoustics of the Self’ (my Doctorate, completed in 2005 at UCL) has had different lives: a substantial part of the sound works developed to a music album entitled ‘Orphica’ which was released internationally by Sub Rosa records in 2007 and gained critical recognition; some pieces were released by Björk on One Little Indian recordings, appeared in advertisements for Prada, were choreographed by Maurice Causey at Nederlands Dans Teatre, toured with international festivals and accompanied underground or cult designers’ shows (Rozalb de Mura, Ioannis Dimitrousis etc). The visual part of the project appeared in exhibitions and festivals in the UK and abroad (eg at BFI, Synch Festival, BAFTA, Tate Modern etc).

The theme of ‘otherness’ has infiltrated a number of my collaborations with visual artists (including Sonia Boyce, Zineb Sedira, Uriel Orlow, Oreet Ashery), choirs (including Alamire Consort with members of the Sixteen, I Fagiolini and the Hilliard Ensemble; Cantamus Choir; Juice Ensemble), and contemporary musicians (DJ Spooky, Claudia Molitor, Matthias Grübel, Gabriel Séverin, Leon Michener etc). A recent interdisciplinary project in which I explored difference celebrating ‘a common vision in uncommon ground’ is MORPHICA, which takes the form of a box-set of a music album, a selection of limited edition visuals, poems and essays. MORPHICA was released by Sub Rosa and has received enthusiastic reviews internationally and forms the springboard for the current project XENON.