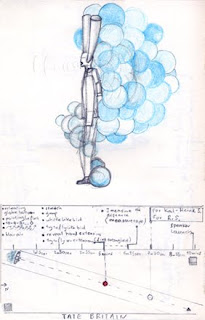 The project begins with a poetic gesture of singing a duet with the stars – an allusion to a yearning for the beyond and a search for existence beyond Earth. For this part of the project I have been developing a character: a suited male City office-worker who is secretly obsessed with the idea of making contact with aliens. In my research I have accumulated information on issues of territorialism in space and on the alarming facts of space junk produced by humans, and I am fascinated by the effects these have on our shifting perceptions of the celestial sphere, and our shattered poetics of the heavens. There is great complexity in the changing role of the sky as a projection screen of our aspirations, mysteries and dreams, and in the position it holds in visual culture as the home of bizarre strangers (from mythical monsters, to heavenly angels, gods, aliens, extraterrestrial parasites etc).

Building on a recent project entitled CONTACT, commissioned by Musée cantonal des Beaux-Arts, Lausanne in Switzerland, in which I began thinking of the voice and sound as perpetual immigrants, always traveling away from their place of origin, I am employing sounds of pulsars (stars in their last stages of their lives), which are received from the heavens with radio telescopes, to create a soundscape. I process very little and structure these celestial sounds, allowing their inherent structure influence the shape of the composition. I’m developing a part for voice (my voice) which duets with the star sounds, and a performance which dramatizes the character’s attempts to make contact with strangers from the heavens. He measures the distance between the earth and the sky, grows ear extensions to listen to the sky, he grows hand extensions to climb onto the moon, jumps and flaps his hands to fly, until eventually, unable to free himself from gravity, he records his song onto a device which he attaches to a bunch of helium balloons to send to the sky. 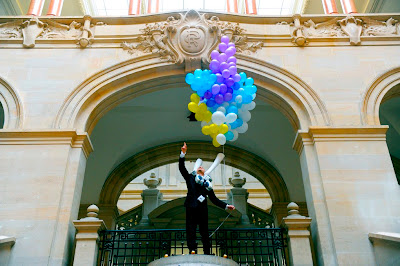 The element of releasing helium balloons carrying the voice away and up into the sky possesses poetic and spectacular qualities which I aim to expand in ACT I. For example, I have been playing with the idea of having multiple speakers hovering on balloons in the performance space, thus creating a floating choir above the audience. Furthermore, I have sourced LED lights for balloons, which when inserted into a balloon, they make it glow. Apart from resolving a problem with lighting (which I have encountered in an experiment) floating illuminated balloons, used in big numbers, give rise to a haunting visual event meditating on the poetics of flight and weightlessness. In addition to voice and sounds of stars, ACT I includes a harpsichord section. The cool, bright and transparent sound of the harpsichord acts as a musical narrator, commenting on the exchanges between the voice and the sounds of stars.
I experimented with sections of this performance at Tate Britain in December 2009, when I was invited to participate in Extraordinary Voices, an event curated by Home Live Art. 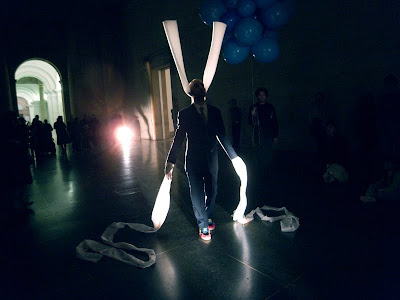 At present I’m also exploring the role of XENON’s voice group in relation to the rest of the material in ACT I. Additionally, I am experimenting with visuals (collages and drawings) which combine Renaissance figure charts of constellations, contemporary photographs of space junk and abstracted images of satellites.
Posted by Mikhail at 16:09